Before the Tang Dynasty, Ējiāo was Cattle Hide Gelatin; and Vegan Options Are Readily Available Today as Ējiāo Substitutions. 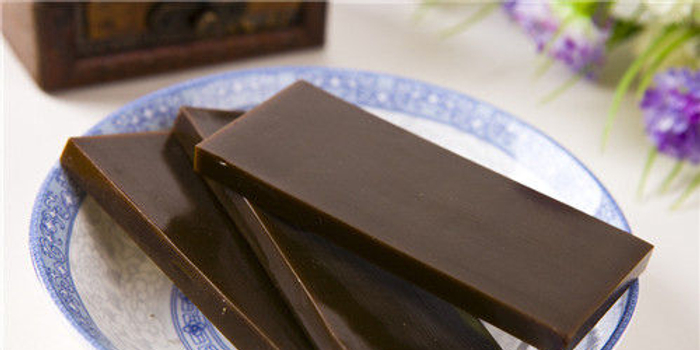 Ējiāo is a medicinal that plays a role in many important formulas that are commonly prescribed for our patients.  In Herbology I we are familiarized with the Latin translation of Ējiāo, Asini Corii Colla, to mean “donkey hide glue.” However, Asini Corii Colla, is not a literal translation of the word ējiāo and reveals assumptions based on the recent history and current production of the medicinal. Try pasting the characters for ējiāo 阿膠 one at a time into Google translate to see what you get. 阿= A 膠= gelatin.  The word ējiāo simply means “gelatin” and is by no means specific to one type of animal.  Historical records verify that during the time of the compilation of the Shāng Hán Lùn, the formulas including ējiāo were possibly made with any kind of gelatin but more specifically – not donkey hides.

In recent years, there has been a surge of interest in China for ējiāo. It is often consumed in the form of traditional snacks such as “ējiāo cakes” that often may contain black sesame, walnuts, dates, and goji berries and is thought to be especially nutritious.

The surge in popularity of ējiāo has grown so great that in 2018 the population of donkeys in China was reported to have shrunk 77% from 1990 levels (11.1 million down to 2.5 million) (Goodrum, 2022). To meet the growing demand, donkeys are being sourced from Africa, Australia and South America.  In Africa, stories have abounded of beloved pet donkeys, that double as the farm work animal and “family car”, being stolen due to the high price their skins can demand. (Nuwer, 2018)  In 2018 alone the price of one single donkey hide was valued at $USD 1,160. (Bennett, 2020); which depending on the region, is roughly equivalent to the average annual income for someone living in Africa. Illegal trade and thefts abound. Animal welfare is of concern. China has, in recent years, set up donkey farms to try and meet the demand locally.  Benett et al recently determined it will take China 10–15 years (or longer) until these farms will be able to supply the hides demanded by ējiāo production. Until then, unless the demand subsides, donkey hide prices will only continue to rise and the crisis will continue.

The substance ējiāo can be found described in China’s earliest Materia Medica, the Shén Nóng Běn Cǎo Jīng; but that does not mean that this gelatin was always made from donkey hide,

“In the Qin and Han dynasties there were many diverse types of gelatin available, and it was not one fixed type, namely according to the records of Zhou Li·Kaogongji, in the pre-Qin period ‘green and white deer gelatin, red and white horse gelatin, red cattle gelatin, black rat gelatin, black fish gelatin, yellow rhino gelatin’ indicating the diversification of early medicinal hide gelatin”. (Zhang JJ, 2020)

During the Tang dynasty it became forbidden to use cattle hides for food or medicine as they were needed for farming and in the production of armor, shields, harnesses for horses, and glue for bows and arrows etc. During that time, the hides that were available for use were likely old and tough and produced poor quality medicine; as such physicians of the time looked elsewhere to produce ējiāo. That is when donkeys came into the story…  as donkeys were not in demand for running the business of the Tang empire, gelatin produced from donkey hide were of superior quality to the scavenged cow hides and so the medicinal focus on donkey hide gelatin began at this time. (Zhang JJ, 2020)  (Zhang, 2014).

A simple replacement: Knowing the story of ējiāo, a simple substitute for ējiāo could be other animal-based gelatins. The familiar texts we use in herbology class, Bensky and Chen and Chen, point to this possibility in their respective Materia Medicas;

Bensky: Ming jiao and huang ming jiao are made from the skin, bones and tendons of cows or sheep, while xin ējiāo is made of pig skin. All of these products are very similar [to ējiāo] in their chemical and physical properties and to some extent in their pharmacological actions. (Bensky, Materia Medica Portable 3rd Edition, 2015, p. 760)

Chen & Chen: The use of ējiāo started approximately in the Tang Dynasty.  At that time, gelatin from many animals was used, including cattle, pigs, horses, donkeys and camels… (Chen & Chen, 2012, p. 937)

Currently, TCM herb supplier websites only list donkey hide gelatin as available. Huáng míng jiāo (cow hide gelatin) prepared to TCM formula specifications, while available in China, is hard to obtain.  However, there exist a number of bovine gelatin/collagen nutritional supplements for sale in the U.S.  Theoretically, we should be able to make the substitution.  Ējiāo is gelatin, and as such, the main active ingredients are amino acids. The table included here is a summary of the key/active ingredients listed for ējiāo available for purchase from Active Herb-TCM supplier as compared to U.S. sourced collagen supplements available from Great Lakes and Vital Proteins.  More research is needed, but preliminarily looks like we have some viable options.

Ideally, from an ethical and sustainability point of view, a nonanimal substitution would be best.  The AIMC professors that I asked about ējiāo suggested Shú dì huáng 熟地黃 (Rehmannia Root) as the number one “off the top of my head” substitution. This is supported by Bensky.

Shú dì huáng compared with with ējiāo: Both substances enter the Liver and Kidney channels, both nourish the blood and enrich the Kidney yin, and are often used in treating blood deficiency patterns and gynecological disorders such as irregular menstruation, or problems during pregnancy or postpartum. (Bensky, Materia Medica Portable 3rd Edition, 2015, p. 759)

It turns out that Classical Pearls, LLC is currently producing a few formulas (Wen Jing Tang, Shu Yu Wan, Bie jie Jian Wan) with charred di huang in place of ējiāo. I contacted the company to find out more on this decision and was told the following by Casey Aron L.Ac who works there:

There were a few factors that went into this decision. One issue is the difficulty in finding genuine, unadulterated ējiāo. Much of the ējiāo in the herb market contains soy and is not pure gelatin. Additionally, finding sources that can ensure that the animals were humanely treated is challenging. Finally, by replacing the ējiāo with a charred dihuang, there are a few of our formulas that are now suitable for vegetarians, that would not otherwise have been.

Heiner Fruehauf made the decision based on experience and advice from his teachers in China that charred shú dì huáng would be a suitable substitution – both nourish the blood, enter the Liver and Kidney channels and nourish Kidney yin. When charred, the actions of stopping bleeding are enhanced in the Dihuang.

“… Asini Corii Colla (ējiāo) can be replaced by other herbs, among which Pseudostellariae Radix (tai zi shen) is the best as it can tonify qi and nourish yin with its neutral nature and moistening quality, which can counteract the acrid and dry quality of Cinnamomi Ramulus (gui zhi)”. (Guohui Liu M.Med., 2016, p. 528)

Conclusion: We live in a land of plenty and there is really no reason for the TCM community in the U.S. to continue participate in the Donkey Hide Crisis when we have so many options available. Making this simple substitution in the AIMC clinic and elsewhere would take us out of the equation and potentially send a strong message for change. As Gary Snyder, the poet laureate of Deep Ecology would say “it is a matter of character … and a matter of style!” (Snyder, 1999, p. xx forward)”

About the Author: Angie McEliece, AIMC class of 2024 can be contacted at amceliece@aimc.edu.