We recently had the chance to sit down with Licensed Acupuncturist, self-published author, and AIMC Masters & Doctoral graduate Kristen “tank” Conner and chat about their book, their experience as a two-time student at AIMC, and their unique style of practice. Tank uses they/them pronouns, which we will be using throughout this article. 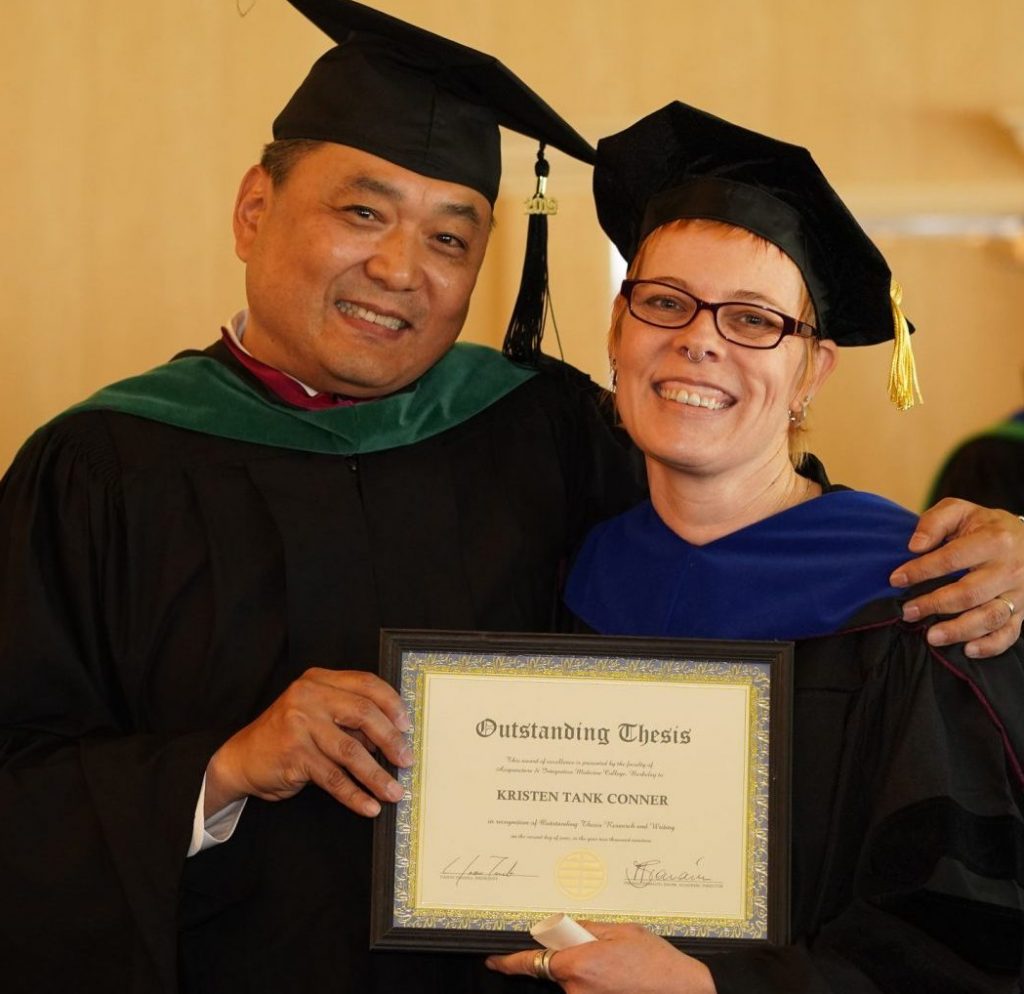 Ehlers-Danlos & the Difficulty of Diagnosis

Tank had lived with a web of various symptoms and discomforts since early childhood before finally receiving a diagnosis in their mid-30s that brought it all together: Hypermobile Type Ehlers-Danlos Syndrome (hEDS). They came to this self-diagnosis before any of their doctors were willing or able to recognize it, and, during their time at AIMC while studying to earn their Master’s degree, a doctor finally referred them to a medical geneticist who made the formal diagnosis.

Tank continued to learn about and advocate for hEDS throughout their time in school and has recognized the signs and symptoms of the disease in friends and patients in the 12 years since their own diagnosis. Tank says when they were first diagnosed,

There are 13 subtypes of Ehlers Danlos Syndrome (EDS), with Hypermobile Type being the most common subtype. It is also considered to be the most “benign” of the EDS subtypes as it’s not as life-threatening as some other types that have greater effects on the vasculature, heart, lungs, and other organs. Per Ehlers-Danlos News, Hypermobile EDS is “characterized by symptoms such as soft, smooth, and fragile skin, hypermobile joints, frequent joint dislocations, scoliosis, and osteoarthritis.”

Those with EDS are often referred to as medical ”zebras” due to the fact that their conditions can hide in plain sight, masked as a variety of common complaints while the overall pattern remains unrecognized. For this reason, the zebra is commonly used as a mascot for all subtypes of EDS.

Tank shared, “there’s very little information in the medical world and almost none in the acupuncture world about this disease.” Furthermore, what information does exist in the acupuncture world doesn’t seem to fit with what tank knows about hEDS. The thinking most commonly encountered by tank when describing their condition to teachers and fellow acupuncturists has been that the syndrome must have to do with the “Sinew” channel system– specifically that the sinews are not being nourished by the fluids of the body and therefore become dry, brittle, and susceptible to injury.

While the dry-sinew hypothesis may explain some aspects of hEDS such as bone deterioration & pain, it doesn’t seem to establish a cause for joint hypermobility. When Sinews aren’t being nourished, Acupuncturists think of ligament tears and shortened tendons– not extra stretchy ones. This left tank with only one solution: come up with their own theory.

“I might be wrong… I don’t mind being wrong, I mind not talking about it. I mind us not recognizing this condition. And I definitely mind us being dogmatic in a shallow way about how to treat a complex disorder like this one.”

Taking it back to the basics, tank relied on their foundational understanding of the relationship of Yin and Yang and the Five Elements to postulate their theory. Tank says “there are some underlying disharmonies that are described pretty well by Five Element Theory,” and then we always have to remember that we have to treat each patient– and even the same patient from day to day– individually based on how they present at any given moment. The fundamental theories offer us beautiful jumping-off points to address the specific challenges and symptoms our patients face. 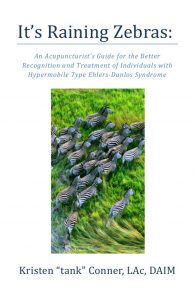 In the course of choosing a research project for AIMC’s Doctoral program, tank initially resisted doing a project on hEDS, but it soon became clear that the world needed this resource. “I had this week right at the end of my first trimester of the DAIM program that hit me like a brick,” they said. “I’d just had another new patient come into my office who was clearly some form of undiagnosed zebra. Then a longtime friend of mine, after decades of being dismissed and misdiagnosed, had finally gotten his diagnosis.” And then, while listening to a guest practitioner interview a patient in grand rounds, tank could hardly hold themself back from jumping in. “Only a few minutes into the interview, it became clear to me that this person needed to get checked out for EDS. And it wasn’t just me seeing it: a handful of other DAIM students with whom I had shared about hEDS were making eyes at me from across the room and mouthing, ‘EDS?’

“When you know what you’re looking for, it’s obvious. The problem is, not enough people know what to look for.” Tank realized that acupuncturists, because they tend to spend more time listening to and touching their patients, were in a better position to recognize hEDS than most medical doctors and could be the key to getting more people diagnosed.

Clearly, something was needed to help bridge this gap and get acupuncturists up to speed on recognizing and treating people with this condition. At first, the idea was to write a chapter for a future book, but as the outline came together and tank pondered which chapter to do, it quickly became clear to them that they were going to write the whole book as their project. Tank says, “I really designed it to be a handbook– I want people to be able to quickly turn to what they need, or to be able to read it in a night.”

Tank learned from an author friend that it could be a challenge to have a publisher pick up the project, and more importantly how long it would take to get the project out into the world on a publisher’s timeline. With this wisdom and tank’s characteristic boldness, tank self-published their book, It’s Raining Zebras.

The Art of Running an Acupuncture Practice

Tank says, “I have to run the kind of practice that works for my life and my level of physical ability”– and that requires not comparing their practice to those of their classmates or mentors. This, of course, is true of all acupuncturists in private practice: our patients show up to see us as practitioners of this medical art form. As we seek to offer our patients the greatest possible liberation in their own physical forms, we ourselves must be in practice with the kind of freedom and comfort we want to encourage in our patients. We have to practice being ourselves in the treatment room and in the design of our career as Acupuncturists if we’d like our patients to do the same.

“My commitment is just for each and every patient that comes in to have my full attention for about an hour to two hours. I have a really deep connection with the handful of people on my table each week, and it’s a beautiful thing.”

In the doctoral program, learning side-by-side with some of their mentors and former teachers, tank was exposed to many different treatment styles and ways of working within East Asian Medicine. At first, they found this intimidating and beat themself up a bit about taking a slower pace and seeing so few patients. Ultimately, however, they found that “it was hugely validating to see the way that other people practiced, with their own individual successes and victories and flavors and see that the way that I am working is the right way for me to be working.”

The Magic of a Doctoral Completion Program

As Acupuncturists, we’re in school for a minimum of three years, and anyone with a Master’s of Science in East Asian Medicine is just a handful of credits shy of a Doctoral degree and title. To tank, a completion-level doctoral degree was long overdue for our field, and they were very grateful when AIMC announced that it would start offering one.

“The doctoral completion program was in many ways a healing experience for me… [The program] was an opportunity to get into some of the nooks and crannies that we didn’t get to in a Master’s program– and beyond that to take a deeper dive on the things we did get into. It was wonderful.”

Thank you so much, tank, for taking the time to share your practice and book with us! We can’t wait to see what you’ll offer the field next.

AIMC students & faculty are welcome to check a copy of tank’s book out from our library.