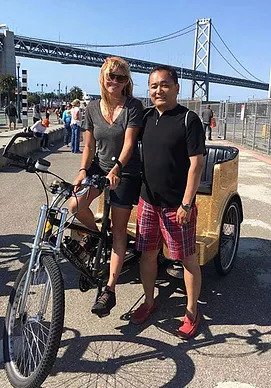 Heidi Hellmuth happens to spot AIMC President Yasuo Tanaka taking a walk along the Embarcadero and offers him a ride in her gold pedi-cab.

On any given Saturday, you can find Heidi H. along San Francisco’s Embarcadero pointing out the sights to her passengers as she leans into her pedals and the bicycle’s chains on her Gold-colored pedi-cab whir. You can imagine her pointing, there—that’s the Ferry Building, the Baseball Stadium, the Golden Gate Bridge…. 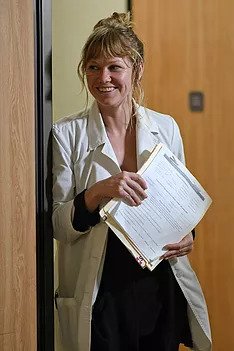 It’s not only San Francisco’s skyscrapers jutting into the sky, with its gauze of clouds, that cuts quite a figure. It’s also Hellmuth herself.

Six years ago, the Fall 2014 AIMC Berkeley student had a bad accident. In 2011, Heidi was helping restore a historic villa in Tuscany and that’s when she sustained severe injuries– orthopedic trauma and extensive nerve damage. She suffered from a vertical shear fracture to her pelvis, shattered coccyx and sacrum. She broke several bones in her feet and sustained a fracture to her talus.

A prominent Massachusetts General surgeon operated on her and told her she wouldn’t walk again. She spent seven months going to physical and occupational therapy and getting acupuncture. Progress was slow. Pain was extreme. But when doctors saw her continued improvements they were surprised: they kept seeing unexpected results in her x-rays. They asked her what she was doing to recover beyond their usual prescriptions. She told them: acupuncture.

“What was most transformative in my healing, I believe, was acupuncture and meditation,” said Heidi.

Now she has recovered almost 100% of her abilities. In fact, if she was an athlete on a professional sports team, you still might be impressed with her statistics. She can bicycle as many as:

She has been driving a pedi-cab for six and a half years, the longest running female in the company. She so liked her job that she attracted another one of our students, Namtak, to get a job with her company, San Francisco Pedicab.

Heidi said she was first attracted to work for the company after seeing pedicab drivers outside the window of the private equity firm where she was working.

“I’d see all these people with their sunhats and riding bikes and acting silly,” said Heidi. It was also a little out of my comfort zone and I wanted to challenge myself. I’d never worked interacting with so many people daily.”

She was so convinced by her own recovery, she took the bold step of applying to acupuncture school. This move followed a long-time interest in nutritional healing and herbalism. She had also worked as a grant writer for a Traditional Chinese Medical Clinic when she was a student at Portland State University.

Heidi said she was attracted to AIMC Berkeley by its externships, its travel abroad program and its Japanese techniques. “That’s why I came here,” she said.

Now that she is seeing patients in clinic, she credits her work as a pedi-cab driver with the ease she experiences working with new patients. In clinic, she says, other students are surprised by how easily she interacts with complete strangers, something some students find difficult.

“I meet hundreds of new people all the time who are often trying a new experience that they may not be comfortable with, just like with acupuncture,” said Heidi.

She also said that her experience with pain allows her to empathize and understand many of her patients. “I can relate to my patients a lot more than I could have before in terms of conditions—pain especially!” said Heidi.