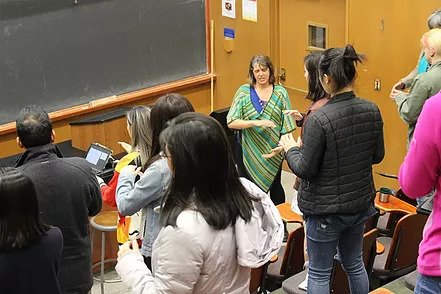 Liu organized the class through the De-Cal program at UC Berkeley which lets students innovate their own courses. Liu wanted to share the power of Traditional Chinese Medicine with other students. It was such an exchange of ideas that philosophy professor Joseph Tussman sought to foster through the Democratic Education at Cal program (DeCal), which he founded in 1965.

Liu’s class joins a wide ranging lineup of De-Cal classes such as “The Music, Lyrics and Art of Radiohead”, “Can’t Tell Me Nothing: The Development of Kanye West’s Artistry” and “Introduction to Leveraged Buyouts”. Since Fall 2016, Liu has attracted the interest of hundreds of UC Berkeley students who are hungry to know more about their health through this new course. 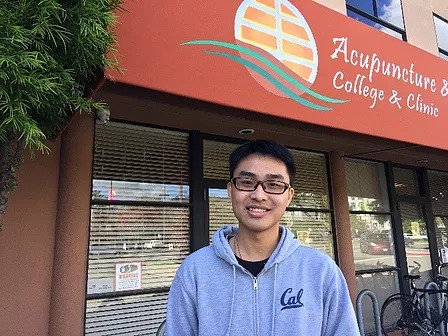 Daiwei Liu asked AIMC Berkeley faculty to help him teach a class about Traditional Chinese Medicine at UC Berkelely, where he is a junior studying immunology.

What fired him up to do all this work? “It’s hard to let something this valuable go unnoticed,” said Liu of Traditional Chinese medicine. “It’s like there’s so much money on the ground and you don’t pick it up. It’s a pity.”

Liu said his father, a Traditional Chinese Medicine Doctor in Liu’s native China, healed a woman with a massive breast tumor by using topical herbs. His patients also healed from nasal pharynx cancer, breast cancer, infertility, and high blood pressure. Liu remembers his family telling him how a Western Medical Hospital couldn’t quell his dangerously high fever when he was an infant. But when treated with Traditional Chinese herbs, his fever subsided.

“Is it normal to get sleepy after eating?” one student asked. “Is it bad to sleep right after you eat?” inquired another. “Is it true that an afternoon nap will help my energy….In China, they take naps in the afternoon…”

Kevin Quach, a Dance and Performance major, clad in grey sweatpants and dark framed glasses, stood in the corner of the class and asked: “With my busy schedule I end up eating a lot when I finally have the time to eat, do you have any advice for me?”

After class, Quach explained his motivation for taking the class: “I grew up with Chinese Medicine. I did a lot of cupping and coining and I never understood why it helped, but it did. I didn’t know the “why” of Chinese Medicine”.

The “why” and “how” of Traditional Chinese medicine intrigues Liu, too. He thinks its perspective will give him a new lens to investigate disease and immunology, his college major.

“I read an English-language scientific paper about diabetes,” explained Liu. “They approached diabetes from a TCM treatment and herb perspective and they discovered that diabetes had an inflammatory aspect. We hardly think of diabetes in this way. The TCM way of looking at disease is going to give me a new angle,” claimed Liu.

Liu’s interest in medicine inspired him to attend the UC Davis Pre-Med conference in Spring 2015. That’s when he heard a lecture by Nishanga Bliss, LAc, the Academic Chair at the Acupuncture and Integrative Medicine College, Berkeley (AIMC), which is just blocks from UC Berkeley’s campus. A light bulb went off when he heard about the De-Cal program and he invited Bliss to guest teach at his De-Cal Class. Since then, Bliss has recruited other AIMC Berkeley faculty to teach the class including Dennis Von Elgg, LAc and Koki Kawamani, LAc.

“It’s so fun to go back to my alma mater and get to teach the next generation,” said Bliss. “I feel like a rock star teaching in front of a big screen with rows of seated students in front of me.” Normally Bliss teaches in more intimate classrooms at AIMC Berkeley with class sizes of about a dozen instead of the 40-50 students she teaches at UC Berkeley.

Bliss and other AIMC Berkeley faculty will be invited back. Liu said he plans to continue moderating the class with the help of AIMC Berkeley next term and next year. But he worries whether another student will take over the mantle when he graduates. He continues to apply for grants to pay AIMC Berkeley teachers who now teach without pay.

Class reviews and interviews indicate students are enriched by the class. Jake Lombardo, who took the class in Fall 2016, echoed much of the feedback.

“Ultimately, I live a healthier life because of the methods I learned in class,” said Lombardo. “I opened up to new perspectives and learned about a culture that I did not have much knowledge about. I am ecstatic to have taken this class and been able to try new things and learn more about the world.”