Origins of President Tanaka, Flying Fish, and the Rebirth of AIMC Berkeley 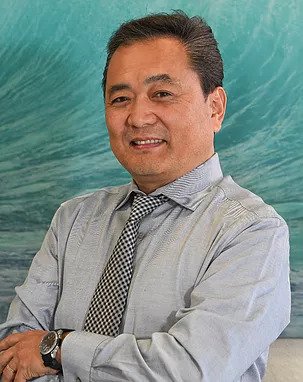 The origins of modern day Acupuncture and Integrative Medicine College, Berkeley (AIMC) really begin with its current chairman, Dr. Shuji Goto. Goto has provided illustrious leadership to acupuncture colleges both in the U.S. and in Japan. Since 1988, Dr. Goto has served as President and Chairman of the Board at Goto College of Medical Arts and Sciences in Tokyo.

And in 1991, Dr. Goto served as chairman of the American College of Chinese Traditional Medicine (ACTCM) in San Francisco.

He became chairman of ACTCM when bankruptcy was imminent. But Goto was able to raise the necessary funds, save the school, and make reforms to create financial solvency. ACTCM acknowledged Dr. Goto’s powerful impact by renaming their library after him. However, Dr. Goto’s work was not over yet.

In 2002, the President of Meiji College of Medicine (MCOM), the prior name of AIMC Berkeley, left his position. MCOM was experiencing a similar state of internal disarray and financial hardship to ACTCM. Knowing Dr. Goto’s prior accomplishments, Mr. Kazuhisa Taniguchi, the chairman of MCOM at the time, reached out to Dr. Goto for his help and guidance. Dr. Goto suggested that MCOM and ACTCM merge so that he could fix MCOM from the inside. However, the Accreditation Commission for Acupuncture & Oriental Medicine (ACAOM) blocked the merger. Faced with a difficult choice, Dr. Goto decided to leave ACTCM and take up leadership at MCOM in 2002.

In his view, Dr. Goto had already created stability at ACTCM and would not turn away from another institution where he was needed. This action also matched Dr. Goto’s worldview. During his time in America, he had noticed health care costs were rising out of control. He felt that acupuncture and herbs were just the affordable healthcare option that America needed. With this in mind, he felt it was part of his life’s work to put the scholastic infrastructure in place to make this dream a reality. In his new position, Dr. Goto decided to rename MCOM to AIMC in 2003. He wanted to emphasize that this new school would teach Integrative Medicine, rather than the narrow foundation of Traditional Chinese Medicine (TCM), which at the time was the only option in America. This initiative would have widespread effects, as now other schools have adopted Integrative Medicine approaches.

The Origins of President Tanaka

President Tanaka, originally from Tokyo, was sent to America in 1991 by Hazama Corporation, a large Japanese construction and investment company; he was to be trained in mid-Manhattan, New York City at Feldmen Equities, an American real estate company. Mr. Tanaka was to learn about investment and management of large assets in America. After this tenure, he relocated to the Hazama Corporation’s American headquarters in Los Angeles where he became a property manager of assets such as hospitals, hotels and golf courses. Mr. Tanaka eventually quit to found his own consulting firm in 2001, Next Strategies, Inc., with his partner, Rytaro Oishi, CPA.As it happens, President Tanaka’s partner, Oishi, had longstanding connections with Dr. Goto. It was Oishi who aided Dr. Goto in the complete financial overhaul of ACTCM.

So, when the time came for Dr. Goto to lead the financial overhaul of the newly renamed AIMC, he called on Oishi again. This time, in 2002, it was Tanaka who conducted a complete audit of the inventory and financial accounts of AIMC Berkeley. Once the audit was complete, the board of AIMC Berkeley asked Tanaka to be its new CFO, since he had the most complete understanding of its current financial state. He served as CFO from 2002-2004 and also served on the board for the next 10 years. AIMC Berkeley was not out of the woods yet. President Tanaka joined AIMC Berkeley during a time of internal discord, and jumped right in to resolve the presenting organizational Liver Qi Stagnation and Liver Qi Rising issues. In 2011, the board asked Tanaka to take up the reigns and become its new president.

Tanaka understood that he took leadership of AIMC Berkeley in a difficult time of internal division. He searched for a philosophical approach to this new challenge of restoring the morale and spirit (Shen) of AIMC Berkeley. For inspiration, he referred to the story of a once unknown, struggling fish market in Seattle. Purchased in 1965 by John Yokoyama, a former fish market employee, in 1986 the Pikes Place Fish Market was on the brink of bankruptcy and needed to reinvent itself. Instead of just save it, one of the fish market employees suggested they make it “world famous.” Their new approach was to focus around making their work fun! They started “flying” or throwing the fish—initially a prank, but they noticed customers enjoyed it—and became a well-oiled, chanting, synchronized unit. They also played games with customers and the staff always brought positive attitudes to work so that customers would feel happy, too. Today, Pikes Place Fish Market is a world-famous tourist destination and high school educated John Yokoyama does high paying corporate speaking engagements for the world’s largest companies.

After taking the helm of AIMC Berkeley, Tanaka commissioned an artist to make an original painting of a flying fish, which now hangs in his office, to represent the new spirit of AIMC Berkeley. He also hung several similar paintings throughout the school. Tanaka then worked to make AIMC Berkeley a happy, synchronized unit. He sought to make the student kitchen the beating heart of the school, where students could connect and share their experiences. Previously, the student kitchen was only a lone, empty table with a foul fridge where people sometimes left food to go bad. Tanaka transformed the space by making a rule that the fridge would be cleaned every week, by putting condiments and snacks on the table, buying two couches, and adding welcoming stuffed animals to create a homey lounge space. He believed some of the most important learning experiences take place outside the classroom, and the new student kitchen-lounge would be just the safe and comfortable place to facilitate these connections.

President Tanaka also sought to create an experience at AIMC Berkeley, where students could reach their full potential with their education. One day while eating with a former AIMC student, Haro Ogawa—now the acupuncturist for the San Francisco Giants—Tanaka learned a way to put this philosophy into words. Ogawa told him that once when he was working on a famous hitter for the Giants, he asked for some tips about how he hit the ball so far. He wanted to share the tips with his son who was just entering little league. The player asked him to think about all the Major League Baseball players and pitchers and if he noticed any of them hitting or pitching the same. The acupuncturist responded that they all seemed to do it uniquely. The player told him that this attribute was the difference between a Major League and Minor League baseball player: pro-level major league players have figured out the best style and skill-set that is unique for them and they constantly work to improve themselves. This was an “Aha!” moment for Tanaka. Instead of just a standard TCM approach, Tanaka felt the best future for AIMC Berkeley students was for them to discover their own unique skill-sets, approaches, and what they truly wanted to offer the world. That way AIMC students could become the best pro-level, major league acupuncturist they could be: the tailor-made practitioner.