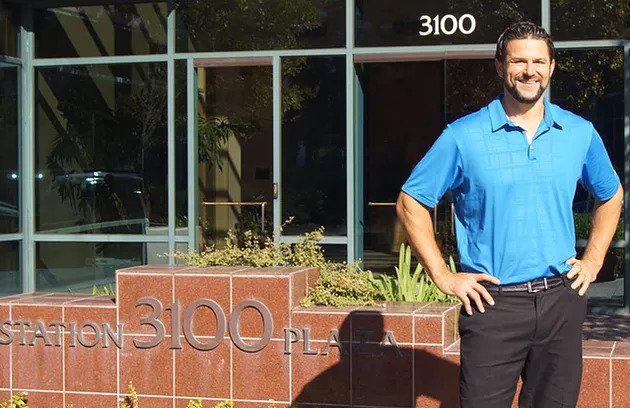 When an acupuncturist says you have heat, they don’t necessarily mean in temperature…. That’s what former Oakland Raiders and Winter 2014 AIMC Berkeley graduate Josh Taves discovered during his first brush with Oriental medicine.

Taves told the story of his early encounter with the medicine when he gave a speech during Acupuncture & Integrative Medicine College (AIMC) Berkeley’s 2014 commencement. He described meeting an elderly Chinese American practitioner at a Food & Wine Fair in Diablo in the dead heat of summer. The acupuncturist diagnosed Taves as running too hot. Taves said he thought: ‘no sh….’ The temperature was above 100, and Taves weighed 300 pounds at the time. (He has since lost 60 pounds).

Taves was sweating profusely. Very astute of the man, he thought! Knowing peals of laughter erupted from his classmates. (Oriental Medicine diagnoses are easily misinterpreted and taken too literally). The practitioner was actually telling Taves that he was out of balance and his entire system was running too hot. It had nothing to do with the external weather. Rather it had more to do with his “internal” weather.

What first attracted Taves to the idea of studying to become an acupuncturist?
“I liked the synergetic effect, said Taves. “I liked how the medicine treats the whole body. How it was hands-on work and I liked the herbal formulas. Then there’s the whole medical side.”

On Campus, this muscular, six-foot seven student was certainly a stand out. He towered over most students. One doesn’t think of athletes as necessarily interested in such a non-traditional career as Chinese medicine. But for Taves it didn’t seem strange at all.

“I was always open to any alternative medicine,” said Taves. “As a football player you’re banging your head on everyone all the time,” said Taves so he and other football players wanted whatever could help them heal. Thinking back, he remembered a team mate who suffered from neck pain and trauma—a common condition for football players. His friend was treated with acupuncture and moxibustion back in 1995. That was when Taves was a rookie with the Detroit Lions, before he signed with the Oakland Raiders, with whom he played from 2000 to 2002.

“I see good results with my patients,” said Taves. “I love it. I have a good time.

Once a student at AIMC Berkeley, it was natural for Taves to choose to use his new acupuncture skills on other athletes. He jumped at the chance to sign up for UC Berkeley’s sports medicine externship that AIMC Berkeley offers, led by Glenn Oberman.

Josh credits that externship with helping him get his present job at St. Mary’s working with athletes there. Taves now balances the day he works at St. Mary’s with his own private practice in Walnut Creek, CA, where he sees about 10 patients per week. Finding the wellness center was a stroke of luck said Taves. “I had an office in my home at first because I was doing some bodywork while I was still in school. Now I’m renting from a chiropractor that’s been in business 20 years.” Taves rents one of chiropractor, Gary Yeager treatment rooms at the East Bay Wellness Center. His other offices are rented by nutritionists, massage therapists, aestheticians and other health care professionals.

Taves treats a lot of sports injuries in his private practice as well patients who complain of stress and pain. One particular patient stands out in his memory. A golfer came to see Taves as a last ditch effort after his doctor told him he would have to have knee surgery. After seeing this patient for about four treatments, Taves’ patient began to recover and no longer required surgery.

When Taves started out he faced a lot of decisions. He needed to create materials such as intake sheets, and to choose what kind of software to use to track patient appointments. He said he needed to pick whether to accept insurance. It turns out about 50% of his patients pay through insurance. He finds that if his patients are covered, they come more often. He also had to set a price structure. He now charges $100 for the first visit and $80 for follow-up appointments.

He said he was glad he had some business background as a mortgage broker because he was used to making business decisions such as creating scripts for himself to follow. You need to know how to talk to your patients and to invite them back. He said he needed to know how to tell his patients that acupuncture has a “snowball effect” the more often you do it, the faster you can recover.

Taves had a lot of business details to work out when developing his private practice which he started more than a year ago in July 2015. He wants to share his journey to help fellow students.

In the accompanying “Business Tips for Starting your Practice”, he outlines some of the required steps and expenses he faced to jump start his business. He hopes other students will get a head start on some of these items before even graduating from school. Describing the time between the end of school and getting your license, Taves said, “You’re in limbo for a few months afterwards. That’s when people should start working on their websites and forms.”

He also said the first year is tough after you take your licensing exams. “School loans will come into effect six months after you graduate. That’s a tough one!” After about a year of being in business Taves said he is happy with his progress,“I see good results with my patients,” said Taves. “I love it. I have a good time.”

To schedule an appointment with Josh Taves or for more information:

Consider doing some of these items prior to graduating:

1. Go out and meet acupuncturists, chiropractors or other practitioners while you are still in school—set a goal such as meet one per term in your third and fourth year at school (they may have a job opening or rental space for once you are out of school)
2. Create a business name that people can remember
3. Get professional pictures
4. Create your business cards
5. Apply for EIN-tax Id number (Employee Identification number, or NPI—National Provider, If you are accepting insurance). Do research on which insurances provider to use.
6. Apply for a business license. Some municipalities don’t require this
7. Decide on a contact management software or a system
8. Create forms such as in-take forms, treatment plan form, diagnosis form, etc
9. Learn scripts about how to talk with your patients about treatment plans. “How to Make Acupuncture Pay” is a good resource.
10. Get a sellers permit to register with an herb company, if you want to sell herbs
11. Create your marketing materials: brochures, business cards, website
12. Figure out how to order herbs for your patients: Eric Brand online, Blue Dragon, Everygreen, Great Lakes, Standard Process. (Standard Process offers a free first CEU class to learn about their herbs)
13. Ask your patients to review you on Yelp

Costs to consider:
1. Liability insurance: approximately $200 per year at start
2. Business cards
3. Brochures
4. Office rental costs
5. Insurance Billing costs, if you decide to use this service: about 7-10% of what you bill through per year
6. A yearly acupuncture license fee
7. Acupuncture supplies (needles, moxibustion, cups, etc)
8. Website costs (designing and creating)