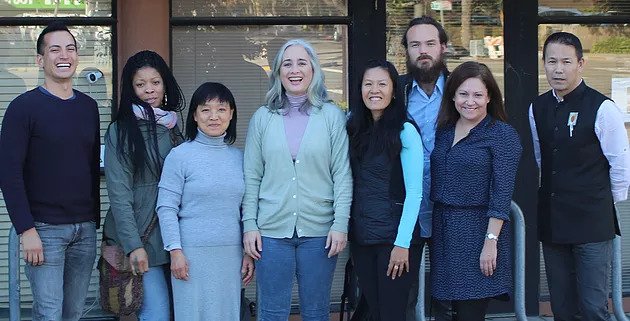 The program starting Winter 2017 is shorter by one term than previously so students can complete it in three years and one third. Japanese acupuncture classes are still offered, but they are now elective rather than required courses. A new Japanese Acupuncture certificate program is expected to launch June 2017 that will be open to both current students as well as to other professionals.

Of the seven incoming students who begin Winter 2017 with the new curriculum, four come with a healthcare background. One new student, Cali James, PhD worked as a senior analyst at Kaiser. Cali James has also taught pilates and practices Taiji. Another new student, Nancy Chan, was a Director at John Muir Health Care in Walnut Creek. Rose Phillips, RN worked in Roseville as a nurse in hospitals, retirement communities and has volunteered as a surgical nurse in Nicaragua. Deanna Woodruff studied nursing before applying to AIMC Berkeley.

Motivations for studying Traditional Chinese Medicine varied from student to student, but all were deeply personal:

“Anxiety disorders are highly treatable, yet only about one-third of those suffering receive treatment,” Nancy Chan said, citing the Anxiety and Depression Association of America. “I heard a licensed acupuncturist say that anxiety is like a mental cold. Similar to a common cold and the mental cold, you can’t just tell someone to snap out of it. I believe Oriental medicine can treat both the common cold and the mental cold in a way that is holistic, allowing the person to transform their suffering into peace, joy and liberation. I would like to learn how to be a healer for others in this capacity.”

Jonathan Pinkston, is a returning AIMC Berkeley student who has studied Ayurvedic medicine, bodywork, cranial sacral methods and planetary herbalism (a term coined by Michael Tiera, LAc which includes Chinese, Western and Ayurvedic medicine). ‘I’m passionate about bringing to light the older shamanic traditions with their roots in Taoist mysticism and esoteric understandings of nature’s effect on the human body and spirit,” said Jonathan Pinkston.

Shehkar Syangden grew up with Eastern beliefs and medicine because he grew up in Nepal. There he saw how acupuncture helped a family member recover from a stroke. New student Deanna Woodruff said she thinks the medicine will contribute to her own deepening evolution as a human being.

Speaking of evolving to greater power is the likes of Iron Man and Captain America. New student Derrek Peel worked as a marketing Manager with SEGA, a video game company that works with titles ranging from Japanese Anime to Marvel Superhero franchises. Before applying to AIMC Berkeley, he traveled to Asia to deepen his understanding of Asian cultures.

“Because of California’s multiculturalism, many opportunities are lost in translation if there is only one view toward wellness. Through integrative Oriental medicine comes a way to bridge that gap,” said Rose Phillips.