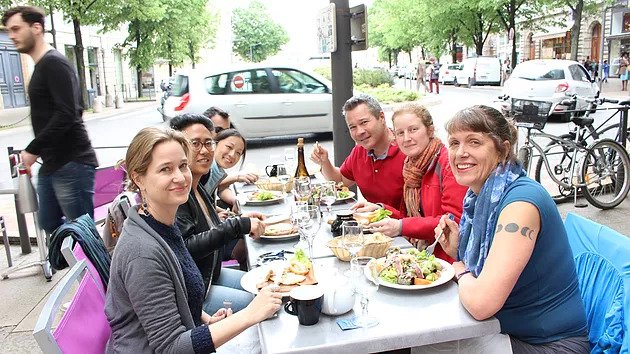 You might ask, did I imagine that within a year of finding Dr. Nogier’s auriculotherapy classes on his website, that I might find myself travelling to Lyon, France in a group of nine students, three AIMC Berkeley faculty members and four LAcs, to attend his seminar?

I’d like to say a sincere thank you to our President Yasuo Tanaka for supporting this idea, to our outgoing and former student, Ann, Esq., who was certainly the catalyst, and especially to Christine Newell, LAc, our native Parisian supervisor (because she did all the work)!

It seemed to come about by chance. I did a little research for Instructor Koki Kawanami, LAc’s Acupuncture Techniques II class. We were scheduled to cover the NADA protocol,, so I dutifully googled NADA and found that ear acupuncture had originated with a French MD named Paul Nogier in 1951… I kept reading and somehow found a link to his son’s page, Raphaël Nogier, MD, complete with seminars. I wondered, like, what could be cooler than to study auriculotherapy in the city of its birth, Lyon, France?

So I went to class the next day and told my neighbor, Ann. She thought it was a fabulous idea. Next I knew, we were chanting, “We want to go to France!”, (much to the class and Koki’s surprise). From there, the idea spread like wildfire. During break, Ann bumped into President Tanaka in the lunch room and repeated our humble request, to which he said, “Yes.”. Ann knew Christine and soon relayed that Christine had called and spoken with Dr. Nogier about a group from AIMC becoming the first U.S. acupuncture students to learn auriculotherapy, à la Française. Vive la France!

Christine began calling hotels to arrange student hotel rates. I contacted NCCAOM to see how we could get CEUs for licensed acupuncturists…

Why else might we want to go to Lyon? The third largest city in France, we were at its center, between two rivers. As a former Roman town, complete with many ruins, it is very much to human scale, very walkable with stunningly beautiful cathedrals, UNESCO World Heritage Sites and, of course, the sound of French everywhere we went. What’s not to like?

Oh, and did I mention, Lyon is the capital of gastronomy in France. The French are very serious about their food and culture. We think of ourselves as “foodies” in the Bay Area, but remember the International Slow Food Movement was officially founded in Paris (No, not Berkeley) in 1989. Its Slow Food Manifesto states it is “for the defense of and the right to pleasure”; it vows to “rediscover the rich varieties and aromas of local cuisines”; “by cultivating taste, rather than impoverishing it” to assure “a better quality lifestyle”. Three out of three AIMC Berkeley students polled said it was all about “the food”; the flavors, “food tasted the way it should taste”, the time spent on preparation and the brilliant French two-hour lunch repose, complete with conversation (Bien sur!)(But, of course!). As we embraced their culture of “slow food”, it was easy to let go of multitasking, “fast food” and power lunches. Quality, not quantity.

So there are many café-lined streets including the very one from which you access GLEM, the Lyon Group of Medical Research. This is where you find Dr. Nogier and his associates who teach auriculotherapy (mostly to MDs) in France, Europe, South America and Africa, just opposite the restaurant, “Les enfants terribles”.

A word about GLEM. It was created in 1965 by Paul Nogier, MD who consecrated his later life to the discovery, development and teaching of auriculotherapy. Today, his son, Raphaël Nogier, M.D, is GLEM’s president. He and his associates work to extend his father’s ideas and to strengthen them with scientific proof using disciplines such as modern neurophysiology.

Our four days of class, taught by Nogier himself (with the help of a translator), began with the history of auriculotherapy. Simple ear treatments were actually performed as early as the time of Hippocrates and were even depicted in a famous Bosch painting from the 15th century. However Auriculotherapy, the discovery that you can treat the entire body through the ear, was only discovered in 1951 by Paul Nogier, MD.

It came to his attention because of the ear point that was being used successfully to treat sciatica by a Madame Barrin. We learned his son still performs this simple treatment today, and quite frequently at that. Paul Nogier’s curiosity was such that it led him to experiment from how this one point might relieve leg/back pain to the theory of how the whole ear might effectively treat the whole body.

In class, we located many of his points on rubber ears and learned how in 1990 the Nogiers worked to standardize the international nomenclature of 43 ear points with the World Health Organization in Lyon.

What about China, you ask? In 1957 Paul Nogier’s ear points were published and exported to the Chinese where they were carried to the countryside by Mao Tse Tung’s “barefoot doctors”. The Chinese at that time had several ear points, but they did not have the concept of the ear as a microsystem for the whole body. The current Chinese ear that we study has many points that do not match the French ear points. Both systems proceeded to evolve separately. In 1988 an attempt was made in Geneva to standardize ear points, but the Chinese did not participate. In 1990 the nomenclature of 43 auricular points was standardized by a working group convened by the World Health Organization in Lyon, France.

In class, we also witnessed a variety of treatments for knee and shoulder pain, allergy determination and even toxic scars that resulted in pancreatic cancer.

One treatment was for our recent graduate who had suffered knee pain for many years. He later told me that he came to study Chinese medicine as a result of how much it helped his knee pain. After the Nogier treatment (which lasted only a few minutes) he reported his knee felt kind of “warm and fuzzy” and totally without pain for the first time since he injured it.

The treatment began with point location on the tragus of the ear with an Agiscop. A point is defined as an area whose electrical resistance (how readily electricity flows through something) differs from that of the surrounding skin. The Agiscop emits a beep when a point is detected. (That the Chinese body acupuncture points can be measured this way was determined in 1963 by Jacques Niboyet, MD, Ph.D.) , Dr. Nogier treated points using semi-permanent needles, electricity generated by two nine-volt batteries within the Agiscop or the Nogier frequencies.

Next, this point was treated with the Nogier frequency device for five seconds, set to frequency D (18.25 Hertz). Frequency D treats motor functions, gait and posture. Other points tested/treated included points for the nervous system, joint and knee pain. Frequency A was used for inflammation. A painful point was needled with a semi-permanent needle.

To explain the Nogier frequencies: Our skin functions as a site of communication between the internal and external worlds. The goal of auriculotherapy treatment is to deactivate auricular points.

“The skin of mammals is endowed with photoperception, the role of which is to stimulate, regulate, and repair the system. If an organism is in good health, the faculty of photoperception is active on its entire skin except on the skin of the ears. However, in the event of disease, the ear points will show active photoperception in order to return the system to homeostasis.”

We discussed a variety of other topics including why women have more auto-immune disease, the importance of dental foci, toxic scars, laterality, the five points with the most spectacular results, metal in the mouth, allergies, the anti-smoking protocol, a PTSD protocol, first rib syndrome, the liver function test… So much!

It was sad to leave Lyon and return to Berkeley. Before leaving, we were able to interview Dr. Nogier about the future of auriculotherapy. He began by saying sincerely, “Auriculotherapy is very exciting.” What came next, (please pardon any mistakes in my translation) sounded revolutionary: Given the limits of traditional western medicine, including the time and cost of research, we should turn to treating everyone with auriculotherapy because it can treat some of the major ailments of our time, including auto-immunity and pain. Immunology is a field where auriculotherapy excels, so more research is needed. “I think auriculotherapy has a very great future.”

Then, being a gracious host, he complimented our class as being “extremely present” and “most sympathetic” before saying clearly (in English),“I hope that you will come back again.” We received his standing invitation to come back to improve our auriculotherapy and to learn the system of the pulse, which “is a fantastic system to better study the auriculo points on the ear.”

So I say, What are we waiting for? Allons-y! (Let’s go!) Vive l’Auriculotherapy!

The NADA protocol came out of Lincoln Hospital in the South Bronx to treat addiction. It was used to help a community that was completely devastated by drugs. Michael Smith came up with this treatment consisting in part of five ear points that was extremely effective. It has grown to 200 programs in 40 other countries. NADA S. Africa, alone (acudetox.org.za) states as its goal to train 5,000 more providers.

The NADA protocol is also used to treat trauma. Many people are unaware how large a role it played in New York City during 911. Our former Dean, Megan Huangs, was one of a team of acupuncturists who treated First Responders after their 12-hour shifts in a convention center that was set up and dedicated to their treatment. The volunteers were also escorted in police cars to fire stations with casualties and to police headquarters in the forbidden zone to give acupuncture and shiatsu treatments throughout the crisis. The need was so great that free acupuncture was available at St. Vincent’s Hospital in Greenwich Village for at least one year.

Even more recently, in 2014, Dr. Daniel Keown published “The Spark in the Machine” which similarly discusses the correspondence between fascial planes and the major acupuncture points. London/Philadelphia: Singing Dragon, p.14

I’m more than happy to discover this website. I wanted to thank you for your time for this particularly wonderful read!! I definitely savored every bit of it and I have you saved to fav to see new things in your website.| а